Get fresh music recommendations delivered to your inbox every Friday.
We've updated our Terms of Use. You can review the changes here.

Phantom Words and Other Curiosities 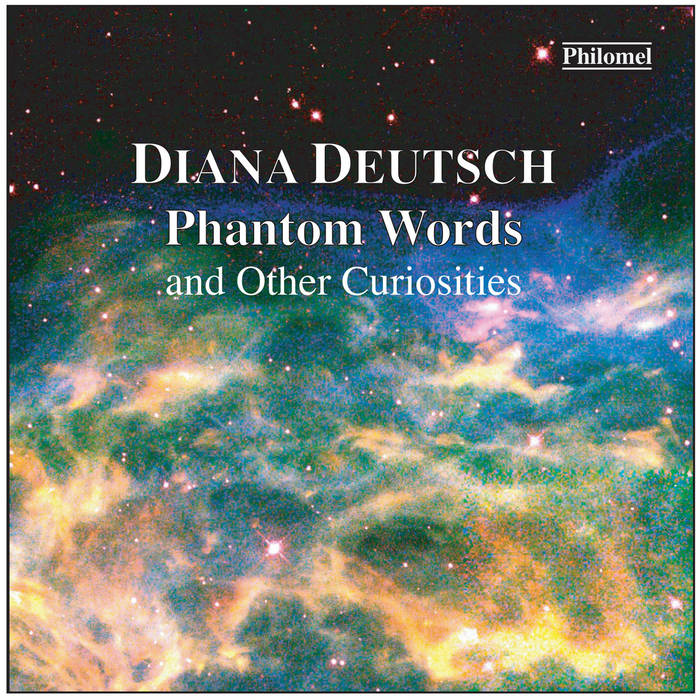 Editorial Review:
Phantom Words, and Other Curiosities presents a series of striking auditory illusions and curiosities of sound perception that Diana Deutsch has discovered. Much of this CD is devoted to exploring paradoxical relationships between speech and music. In one demonstration, a spoken phrase is repeated several times over. At some point, instead of appearing to be spoken, the words appear to be sung. Another set of tracks demonstrates a striking dissociation between musical tones and spoken words in memory. The CD is named after the first few tracks, which contain sequences of repeating words and phrases that arise simultaneously from different regions of space. The words coming from the different spatial locations are offset from each other in time. As a result, listeners are given a palette of sounds from which to choose, and so can create in their minds many different combinations of sounds. After continuous exposure to these repeating words, listeners begin to 'hear' words and phrases that are not really there. These 'phantom words' are generated by the brain in an attempt to extract meaning from the chaos of sound that is presented. A new musical illusion is also featured, called the 'cambiata illusion'. Two repeating patterns of tones are presented, one to each ear. Although the tones in each pattern differ markedly in pitch, many people instead hear two melodies formed by tones that are close in pitch, called 'cambiata patterns'. The brain rejects the jerky, improbable patterns that are being produced by the earphones, and reorganizes the sounds so as to create orderly patterns instead. This striking perceptual reorganization represents another attempt by the brain to create order out of the chaos of sound that is presented. The CD includes extensive spoken commentary, and comes with a 20-page full color explanatory booklet which explores these perceptual curiosities in detail. For further information including sound examples, see philomel.com.

Front Cover Image: Detail of photograph of the Crescent Nebula, taken with the Hubble Space Telescope. Courtesy of NASA and NSSDC.

Diana Deutsch is Professor of Psychology at the University of California, San Diego, She is internationally known for the musical illusions and paradoxes that she discovered; these include the octave illusion, the scale illusion, the glissando illusion, the tritone paradox, the cambiata illusion, the phantom words illusion and the speech-to-song illusion, among others. ... more

Bandcamp Daily  your guide to the world of Bandcamp

Alex Rita and Errol from Touching Bass feature in our special London edition of the Bandcamp Weekly.