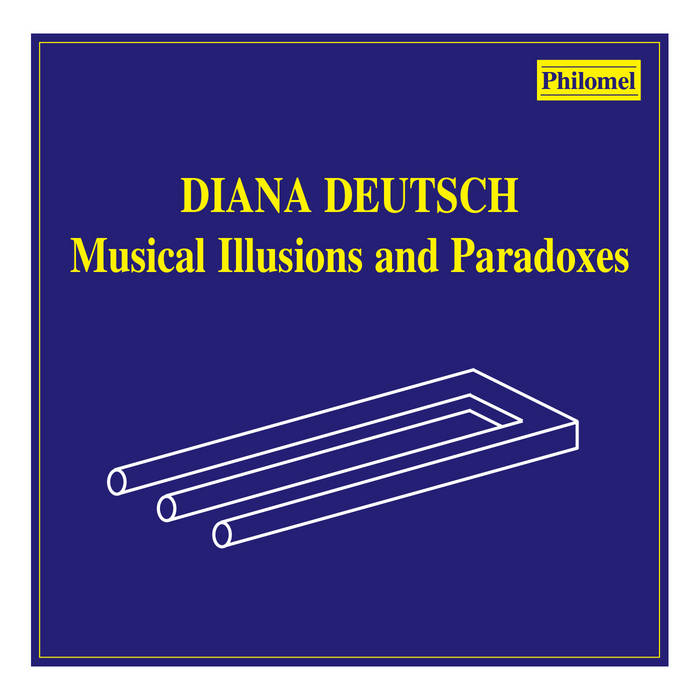 Editorial Review:
Musical Illusions and Paradoxes brings together a number of compelling musical illusions and paradoxes that were discovered by Diana Deutsch. The sounds as they appear to you are not only quite different from those that are really present, but they sometimes behave so strangely as to seem quite impossible. The illusions also show that people can differ strikingly in how they hear very simple musical patterns. For some illusions, namely the octave illusion, the scale illusion, the chromatic illusion, and the glissando illusion, disagreements tend to arise between righthanders and lefthanders, showing that they reflect differences in brain organization. For another illusion, the tritone paradox, perceptual variations depend on the geographical region in which the listener grew up, showing that the way we perceive music can be influenced by the language spoken around us. Using the principles that generate Deutsch's illusions, we can now produce music that sounds radically different from one listener to another, and even from one audience to another. The Compact Disc contains extensive spoken commentary, and comes with a 32-page full-color booklet which describes and illustrates the illusions in detail. For further information including sound examples, see philomel.com.

Quotes about the CDs:
"These two CDs are absolutely mind-boggling. Diana is, in effect, hosting a magical mystery tour of your own brain, and believe me, it's quite a ride." - from review by Ian Rowland.

'The illusions range from the beguilingly simple to, as she says, "true weirdness, the twilight zone."' - Peter Monaghan, 'In the Twilight Zone of Sound', Notes from Academe, Chronicle of Higher Education, November, 2003

“You will hear things that aren't there, perceive differences that don't exist except in your imagination, be befuddled by the auditory processes of your own brain, and listen as your own mind slowly transforms plain ordinary speech into melodic music. If all this sounds weird and wonderful and intriguing, well, it should. I've been playing these CDs over and over again ever since I first got them, and I still can't believe half of what I'm hearing.” Ian Rowland, Mentalist Magician, Entertainer, and Skeptic

‘In two CDs published by Diana Deutsch in the last 12 years, however, music has defied this author’s intuitions and crashed the scene.’- Ben Carson, American Journal of Psychology, Spring, 2007

'A fascinating compact disc. Musical Illusions and Paradoxes is both entertaining and disconcerting. I was amazed by my own misperceptions and . left somewhat disturbed wondering if throughout my life I have been hearing what Verdi and Britten intended' - Patrick Bell, Sound and Video Contractor, March, 1996

'Ready for a science experiment on the stereo? Musical Illusions and Paradoxes . an audio CD created by psychologist Diana Deutsch at the University of California at San Diego, proves that illusions aren't just for the visual realm . They are great for amazing your friends' - Discover, December, 1998

'A wonderful source of audio examples to explore and experiment with.' - CafeMuse

'each demonstration provides the amateur scientist with the materials to conduct research on how the brain processes sound.' - The Society for Amateur Scientists

'On the musical illusions CD you'll find the octave illusion and the tritone paradox, both of which are discussed in the textbook. On the Phantom Words CD you'll find additional clever demonstrations, including phantom words and 'music' emerging from repetitive speech.' - Matlin & Foley, Sensation and Perception

'An amazing collection of auditory illusions very reasonably priced. Well worth buying for school resources, if not home use. Also has a very useful explanatory booklet.' - The National Science and Technology Centre, Canberra, Australia.

'Of course being audiophiles, we love to experiment - with nearly everything. And here's just the ticket: a foray into the perception and memory for sound, with extensive examples, albums, and a decidely scientific and professional bent that should enchant you for some time' - Barry Ober, Boston Audio Society, November, 2005

'One of the weirdest experiences one can have. Don't miss it.' - Skeptics Society

'I could scarcely believe my ears.' - Eugene Pitts, The Audiophile Voice, 2004

'A fascinating new exploration into how we can be fooled- Scot Morris, Science Writer, Omni Magazine

Diana Deutsch is Professor of Psychology at the University of California, San Diego, She is internationally known for the musical illusions and paradoxes that she discovered; these include the octave illusion, the scale illusion, the glissando illusion, the tritone paradox, the cambiata illusion, the phantom words illusion and the speech-to-song illusion, among others. ... more

Bandcamp Daily  your guide to the world of Bandcamp